The trip to Mt Yasur is a slow one.

Despite Tanna Island being very small, roads are narrow and often single-laned. The road to Mt Yasur takes you over the middle of the island in a 4WD. The island is less than 20km wide, but it takes well over an hour.

Our driver pulls into the scrub at the top of the hill, and we get a great view of the volcano and the coastline. Even here, a low rumbling is audible, thunder without clouds. The air is thick and brown. I would have preferred a designated viewing spot – the drop off on each side is precipitous.

The road descends through verdant tropical fields, past village markets and hamlets, before emerging suddenly into broad ash plains. It’s like rough, black sand, a dark Sahara. Nothing grows.

Towering in front, the volcano spews smoke and rumbles angrily. Curiously, there is no smell. I had expected a sulphurous stink, but there is nothing. Our guide follows previous tyre tracks as our path takes us around the mountain.

On the other side of the volcano, vegetation appears once again. Small villages huddle at its foot, spotted with boulders previously hurled in particularly active periods. Curious tree-houses seem to be the architecture of choice, though whether this is specifically for tourist purposes, I cannot say.

The locals have built a visitor centre at the entrance to the park, and our driver drops us here. Over the next thirty minutes, a surprising number of tourists arrive, mostly from Australia and New Zealand.

Here, we are treated to a cultural display. A dozen locals dance, recreating a traditional history, in native costume. Some of them are older, others surly teenagers performing under sufferance with bored or embarrassed expressions. Some way through the display, it is clear that audience participation will be required.

Let me digress here. I hate audience participation. For some reason, I am singled out regularly. If I’m at a circus, the clown drags me from my seat to be embarrassed. At a burlesque show, the drag queen wants to question me. At the airport, I’m always selected for special bomb checks.

As soon as the show started, I knew I was in for it. Sure enough, a grass-skirted gent dragged me out of the crowd to present a significant stick to the tribal elder. I bit my lip and went with it. It was relatively painless.

Once the show is over, we are loaded onto the back of four utilities, and driven up an unsealed road to an open space a short distance from the summit. From here, a rough-step pathway leads to a viewing area. 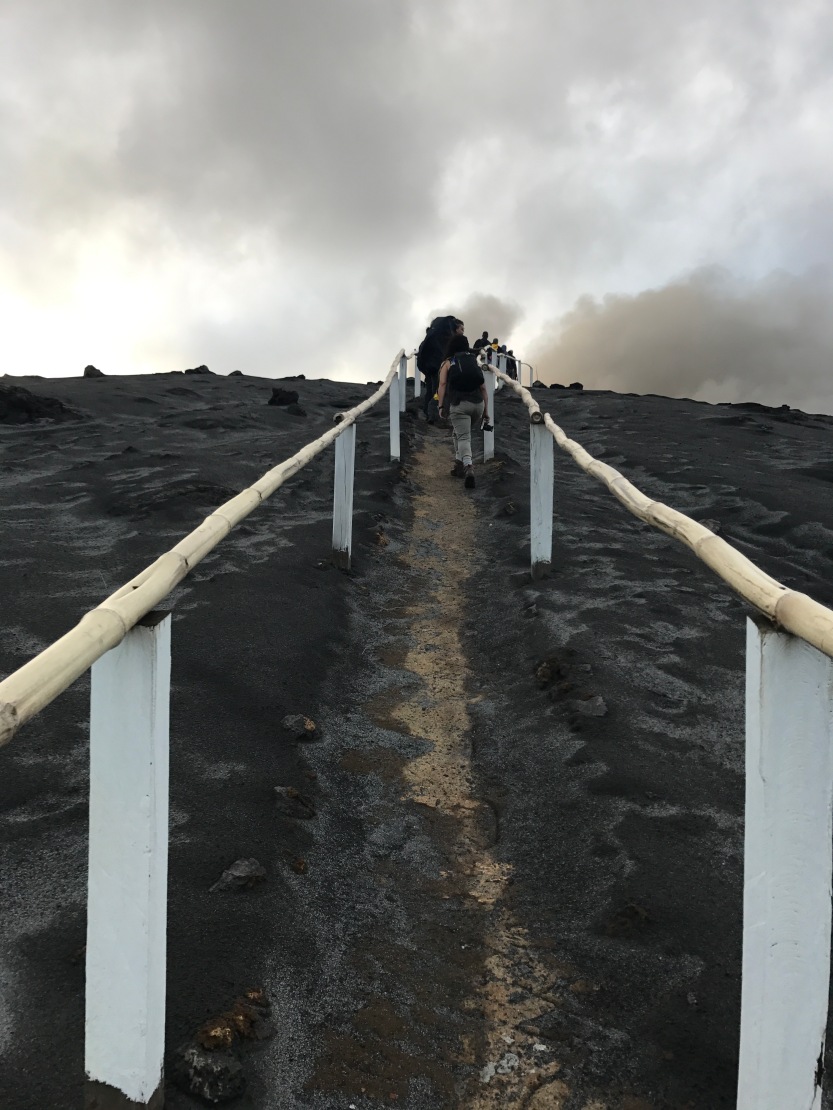 This spot is perhaps ten metres wide, on the edge of the crater. There is no fence. In front of you, maybe fifty metres away, the mountain boils and roars. Huge clouds of dark smoke billow up, the earth sounds like it is hissing and spitting. Short periods of quiescence are followed by explosions, with glowing red rocks thrown high into the air. I had never seen the like of this before, but after ten minutes or so, the spectacle became commonplace. At this point, the volcano was at level 2, out of a maximum 5. If it reaches level 3, the tour is closed. The boulders we observed earlier were ejected at level 3.

After half an hour, our guide took us to another viewpoint. We walked along a narrow ridge along the top of the crater (again, no handrails) to a high lookout, seemingly directly above the cauldron.

This was a different experience altogether.

The noise here was deafening. It sounded as if a jet engine had been installed beneath my feet. In turns, the earth exploded or boiled, with steam screaming through a natural kettle.

Brown clouds of smoke blossom from the earth. Lightning forks and cracks within the plumes, a thunderstorm of ash.

A red-hot pot of boiling rock roiled below. It seemed inconceivable that the mountain could retain its integrity long in the face of this anger, yet I was unable to feel the earth rumbling beneath me.

I found the experience terrifying, and no matter how long I stood in that spot, the terror never lessened. I itched to return to the previous viewpoint, but refrained for fear of looking weak. No wonder that the ancients feared and worshipped the god of this mountain, for surely he was mighty and terrible.

As the afternoon wore on, the sun sank below the hills, and the experience became an entirely new encounter. The tour lasts until after 7pm, and in the dark the volcano shows all of its fearsome power. The fire and molten rocks stand out, and it becomes clear exactly how much material is ejected.

In due course, we’re given hand-cranked torches, and asked to walk back along the edge of the crater to the parking area. In Australia, such an activity would be unthinkable for fear of injury, and a serious one at that. Returning to the utes, we are delivered back to the visitor centre, and provided with a drink and some local fruit.

This was an unmissable experience, despite the terror. For a moment, I too worshipped the god of the mountain.